The ultimate in remote controlled ‘toys’ – an unmanned aerial vehicle, as it is technically known – is being used to spray weeds along tough-to-reach lengths of the First Gas pipelines.

But this miniature helicopter isn’t child’s play. Operated by Green Streams Weed Control, based in Pirongia, the vehicle is more than 3.5m long and a metre high, and has a serious role to play in helping ensure the pipelines remain safe.

“One of the major ways our pipelines are protected is by being buried in a registered easement or designation. People activities, plant growth, erosion and natural land movement can compromise pipeline integrity, so it’s very important we monitor the easement.” First Gas transmission operations manager Ryan Phipps explains.

“We regularly fly the network to check this isn’t occurring, but if weeds are covering the easement, we can’t see what’s going on. The pipelines need to run nice and clear of weeds across the 12m wide easement.”

That’s where spraying comes in.

In the past, for areas that are difficult to reach, a vehicle, such as a quad bike, has been used, or a helicopter with a bucket.

“Some of the areas are steep, so you don’t want to send in people in vehicles and, if you use a helicopter, the bucket has to go below the tree level, which is a risk to the aircraft and the pilot,” says Ryan.

“With the unmanned vehicle you can fly at a fairly low level, and it’s really good for the likes of short slopes where helicopters might struggle to move or get close enough. And, because it’s unmanned, there’s no chance of injury.”

The vehicle, a Yamaha Rmax UAV, has a 246cc two-stroke, horizontally opposed two-cylinder engine, can carry 20 litres of spray and is operated with a handheld remote.

The innovative technology is being used in difficult-to-reach areas of forestry and bush blocks of south and north Waikato, and Bay of Plenty.

“Farmland is typically not an issue as cropping activity or stock clears the weeds,” says Ryan.

The work proved invaluable during summer, as the heavy growth period meant some areas had to be sprayed every month to keep them free of pampas grass and, in particular, gorse.

“It’s a really useful tool and although we have only been using it since last year, it is already playing an important role in helping us ensure the pipelines are safe.” 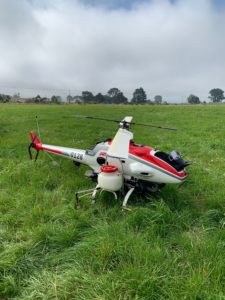 The unmanned aerial vehicle (above) is being used to spray weeds along tough-to-reach lengths of the First Gas pipelines. 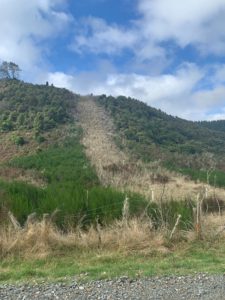 An area of sprayed easement.