Hot-shot welders flown in from overseas… specialised tractors and machinery imported just for the job… X-ray technology and cutting edge techniques – the construction of the Kāpuni gas pipeline was a grand and ground-breaking undertaking for New Zealand.

The stories behind the construction of both the Kāpuni and Māui gas pipelines, which hug the North Taranaki-Waitomo coastline, are now the centre of a new exhibition at the Mokau Museum and Gallery.

Researched and designed for the Mokau Museum by First Gas, which owns and operates both the Kāpuni and Māui high pressure gas transmission pipes, the exhibition relives the experiences of locals during the laying of the pipelines from the late 1960s to the early 1980s.

At the centre of the exhibit are filmed stories of people who have an intimate knowledge of the pipelines’ march north along the North Island’s west coast, from the gas fields in Kāpuni and off Oaonui in Taranaki.

People interviewed include: Russell Gibbs whose land the pipelines go through at Tongaporutu; Haumoana White who recalls the surge of workers flooding the usually quiet seaside North Taranaki villages during the construction causing quite a stir; Davis McClutchie whose cows were almost trapped by the speed the pipeline was being laid; Greg White who recalls Māori being highly suspicious of the motives of those behind the pipelines’ construction; and Derek Coombe whose job it is to regularly ‘walk the line’ – literally tramping the pipelines’ route.

Photos taken at the time of the construction are also on display, as are interesting facts and figures, and even the quirky sayings of the workers laying the pipes at the time.

Mokau Museum Committee Chair Murray Seamark said it was important to tell the story of the pipelines’ development and the sacrifices and compromises made by many people so that “we can enjoy gas ‘on tap’”.

“It is a significant part of the local history. It had a huge impact on the local people and the land itself.

Some of the most difficult terrain was in the Mokau-Clifton areas and it took an extra-ordinary effort by all to get the job done,” Mr Seamark said.

“Can you image life now without the gas line? We all take it for granted.”

He said Mokau Museum was the perfect place for the exhibition.

“Throughout this stretch of coast you follow the pipeline as you travel. Nowhere else is it so visible, so the museum is the best place to tell the story to the travelling public.”

Mr Seamark said the exhibition was bright, informative and reflected the issues people faced in the day.

“The museum is extremely grateful to all our sponsors, including First Gas. The generosity of organisations like this enables museum staff to collect, archive and display local taonga. Without the many volunteers and sponsors much of what you see in the museum would have been lost forever.”

First Gas Group Chief Executive Paul Goodeve said his company was proud to support the Mokau Museum and build on the collection of stories and history of the area.

“The construction of both the Kāpuni and Māui gas pipelines were significant engineering feats of their day. Many people in and around Mokau, Awakino, Tongaporutu, Pukearuhe and surrounding areas were either involved or remember the scale of the work and the people who came into the area,” Mr Goodeve said.

“We believe it is important to capture this history and stories before they are lost, so that people now and future generations can learn more about what makes up the social fabric of these communities.

“Thank you to the people who gave their time to share their stories for this piece of history.” 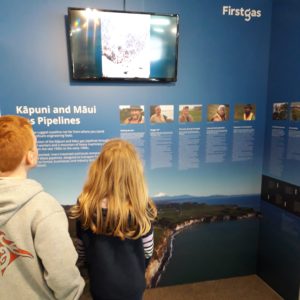 Above: Visitors to the Mokau Museum learn about the history of the Kāpuni and Māui pipelines in a new exhibit.